How many different types of drum sticks exist? Let’s be honest, they’re probably the least exciting part of a drum set, but also one of the most important ones.

If you think about it, a drumstick is what connects you to your drum set, so picking the right pair might be a bigger deal than you expected.

They come in a bunch of different sizes and shapes, so when it’s time to choose your pair, there are a ton of factors that can influence your final decision.

To make the best decision possible, you need to at least know the basics about drumsticks to make an educated guess on what might suit you the most.

I’m assuming you don’t know anything about drumsticks, but don’t worry, this article will focus on everything you need to know about them before buying your first pair.

We have a lot of things to discuss, so let’s dive right in:

A basic drumstick consists of:

Tip or bead: the point of the drumstick you usually hit your drum heads/cymbals with. It can have many different shapes and/or materials as we’ll see in the next topic.

Taper: the part that tapers towards the tip. Mostly used to play the bell of a cymbal or sometimes percussion instruments, like a cowbell.

Shaft: the straight area where your hands usually are. Considered the body of a drumstick, used for playing cross-stick or a louder cymbal crash.

Butt: the opposite end of the stick, the furthest point from the tip.

What are the options for drumsticks’ tips?

Like I said before, the tips come in different shapes and/or materials that affect the feel and the sound produced.

The two main materials used for drumsticks’ tips are wood and nylon.

The nylon tips offer a brighter and more articulate sound while the wood ones bring a darker and natural tone to your drum kit.

Wood is the most versatile out of the two options, as it can be used in every music genre. Sadly, they deteriorate over time and end up chipping or even breaking eventually.

On the other hand, nylon isn’t as versatile and won’t be used in certain genres, like jazz.

They also tend to last longer (unless they somehow fall off), since they don’t chip like wood ones.

The usual shapes are as follows: 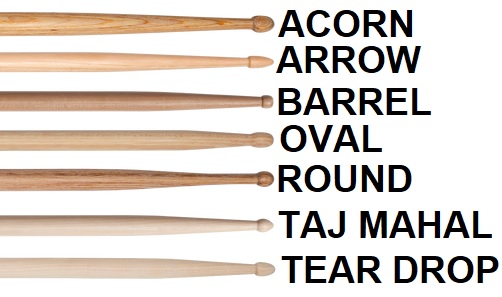 All these shapes fall under 3 geometrical groups: round, oval, and triangle shape and they affect the sound just as much as the material. If the surface is small (e.g., barrel or round tip), expect a more defined sound. The opposite happens for a larger surface (e.g., oval or teardrop tip).

Just like everything else, there’s no right or wrong when it comes to drumsticks tips. Some are better than others for certain sounds or applications, but none is the best. It’s all a matter of personal preference and what fits the sound you’re looking for.

Just go to your local music store, test them all in a practice pad and pick the right thing for YOU!

Does the taper influence the overall feel of a drumstick?

Yes, it affects both the feel and the balance of a drumstick. The length of the taper, and simultaneously the shoulder location (where the taper starts) determines if the sticks feel heavier on the front, back, or perfectly balanced.

A longer taper will place the majority of the weight where your hand grabs the drumstick, making it faster, but also less powerful and less durable.

On the other hand, a shorter taper feels more front-heavy, providing more power and durability, without necessarily switching to a thicker and heavier drumstick.

If you don’t want to compromise the speed, power, or durability, pick a stick with a medium taper for a well-balanced feel.

2 - What’s with all those letters and numbers?

The first thing you need to know about the letters and numbers you see in every drumstick is that the letters refer to the application and the numbers to the weight/thickness. The higher the number, the lighter/thinner the stick.

So, what does each number and letter represent? Let’s start with the letters:

In other words, S is the largest and heaviest drumstick there is, followed by B, while A is usually the thinnest/lightest. D is an uncommon drum stick nowadays, but its weight and diameter are somewhere between an A and a B.

That association between a letter and its application is long gone, but they’re helpful for you to know why they were created in the first place, and how they might feel.

Currently, the letters pretty much mean that, within a certain number, there are different thicknesses depending on the letter next to it.

7A and 7B share the same number, but A is the lightest letter and B is the heaviest, therefore the 7B is thicker and heavier than the 7A.

They usually range from 2 to 9, but 2, 5, and 7 are the most common ones with 2 being the heaviest and thickest drumstick, while 7 is the lightest and thinnest one. 5 is the balanced middle ground.

After reading that, we can safely conclude that a 7A drum stick is the lightest one, ideal for lower volume situations like a jazz concert or orchestra.

On the other side of the spectrum, 2B are heavy sticks for rock and metal drummers mostly. They’re also good for practicing since you’ll eventually go back to your regular 5As, or whatever you use daily, and everything will seem way easier.

Heavier drum sticks are more durable while providing more volume, while the lighter ones are less durable but ideal for situations where lower volume and finesse are necessary.

What you end up with is a matter of personal preference and it’ll be a result of years and years of trial and error.

Usually, it’s considered safe to start with a 5A drum stick, which is neither too thick/thin or too heavy/light.
After that, it’s up to you to decide if you would rather play with a thicker/heavier drum stick or a thinner/lighter one and if you prefer wood or synthetic models.

Let’s take a quick look at the most used drumsticks models:

Let’s talk about the most common materials used to manufacture drumsticks.

In this day and age, we no longer use drumsticks made from bones, and nowadays, they are usually made of some sort of wood.

Apart from that, there are also a few synthetic drumsticks made from aluminium/polyurethane or carbon fiber.

Since aluminum and carbon fiber drumsticks are more durable and last way longer, they can also destroy your cymbals and/or drum heads easier thanks to their “inflexibility”.

Only use them with a practice pad, or be responsible enough when playing your drum kit to prevent unwanted damage.

Plus, they are multiple times more expensive than regular wood drumsticks, so that’s something to keep in mind before making the jump to synthetic drumsticks.

Additionally, wood drumsticks absorb the vibration produced while playing, which is why they eventually break, sooner or later, instead of straining your hands/arms.

Non-wood drumsticks, especially carbon fiber, are denser and absorb way less vibration which ends up with your body paying the price.

The coating of a drumstick might sound like a thing that doesn’t matter in the grand scheme of things, but trust me, it does, especially if you sweat a lot.

Sweating and playing with a stick with a lot of lacquer can be extremely difficult, as it is harder to hold on to.

In that case, buying a stick with a special grip might be the best decision you’ll ever make when it comes to drumsticks.

These models offer some sort of non-slip coating in the shaft that prevents the stick from flying out of your sweaty hands.

Now that we know that, here are the different coatings available:

If you thought basic drumsticks were the only ones used to play the drums, or other percussion instruments, you’ll be pleasantly surprised to find out that’s not true.

Thanks to the necessity of controlling your playing volume, a few different sticks surged over the years.

The most common ones are:

Buying drumsticks from experienced manufacturers is the way to go, as each stick goes through a series of tests to ensure every drumstick is well balanced, matches the pair in terms of density and weight, and doesn’t have any defect.

If you don’t have any experience at all and are currently looking for your first pair of drumsticks, here are most of the well-known drumsticks manufacturers that offer a versatile catalog:

As you should know by now, there are a few factors that come into play when choosing drumsticks.

Sadly, there isn’t a single pair of drumsticks that can do it all, just the perfect pair for a certain situation.

With this guide, I hope you can now identify most of the options available on the market, understand the labeling and pick the right pair to fit your current needs.

It’ll require a lot of experimentation, but finding the drumsticks that compliment your style is essential to express yourself through music.

Start now and don’t give up if the first pair you buy doesn’t feel as good as you expected.

Go to a music shop and experiment with different sizes, weights, woods, and brands. They might even have a worker that will guide you through the process of picking a pair of drumsticks.

Someday you’ll pick a pair that matches your style and you’ll never look back.

Have fun testing all the different types of drum sticks!

Curious enough to find out how drumsticks are made? Watch this: